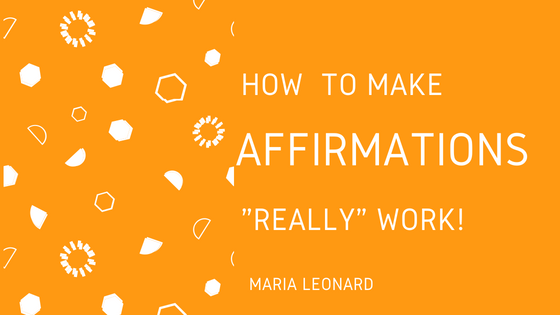 “I am wanted.”“I love and accept myself.”
“Life is pleasurable.”
“I am always at the right place at the right time.”
“The more I give, the more I receive.”


Affirmations are statements, which are used to change a state of being. They are tools to transform an unpleasant belief or beliefs, and are mostly done consciously by repetition.

Now since unpleasant emotions are not very much welcomed and accepted in our “dualistic” reality we tend to replace them with so called, “positive thinking”. In my view, positive thinking is not just seeing the glass “half full”, it is acknowledging that our perspective of reality is dualistic and by programming the self holistically that we can choose the “lighter side” and accept the “darker side” whenever it occurs. ACCEPTANCE plays a key role in this form of mind and body programming.

One of the simplest ways to switch viewing a situation or reality in general is through affirmations, and although many find them effective, some don’t.
Through observation and experience, one of the most important reasons that has been noticed is that the affirmative statement(s) used by a person is a very generic one which doesn’t pin point her/his most dominant thought pattern.

It can be similar to complimenting someone and yet their belief about themselves is much stronger than a few “nice or positive” words.
For that reason, it is highly effective to know clearly one’s most dominant thought, and then choosing the right set of words will trigger and transform a person’s state of being almost immediately.

Another important aspect to integrate the new thought or belief system is to take responsibility of one’s own creation. Most, if not all beliefs are created unconsciously and are a reflection of what one has learned and accumulated from the moment of their creation up to the present “now”.
Whether one believes that life is continuous through the existence of an infinite soul and that each lifetime still has an imprint on a current lifetime, does not change the fact that there is a process of accumulating beliefs unconsciously and creating patterns of reality.
So choosing to accept what has been created in the “here and now” is a byproduct of a previously repeated thought or thoughts, and that gives us the chance to change and create a state of being that brings us joy.

So what can you really do?

Make it a habit! A daily habit!

Writing it in a journal, looking at yourself in the mirror while saying it out loud, recording your voice and listening to it (more than once).

It sounds simple and easy, and it really is ONLY when you ACTUALLY DO IT!

The beauty of the universe is, whatever you continuously put out there actually manifests. Our role is to take responsibility of our creation, accept whatever we have unconsciously created and believed to be true, and move on into creating something that we really wish to experience.

Go ahead and start creating!

PS For more ideas on affirmations go to the stopandaffirm page.

View all posts by iammarialeonard

There was an error retrieving images from Instagram. An attempt will be remade in a few minutes.